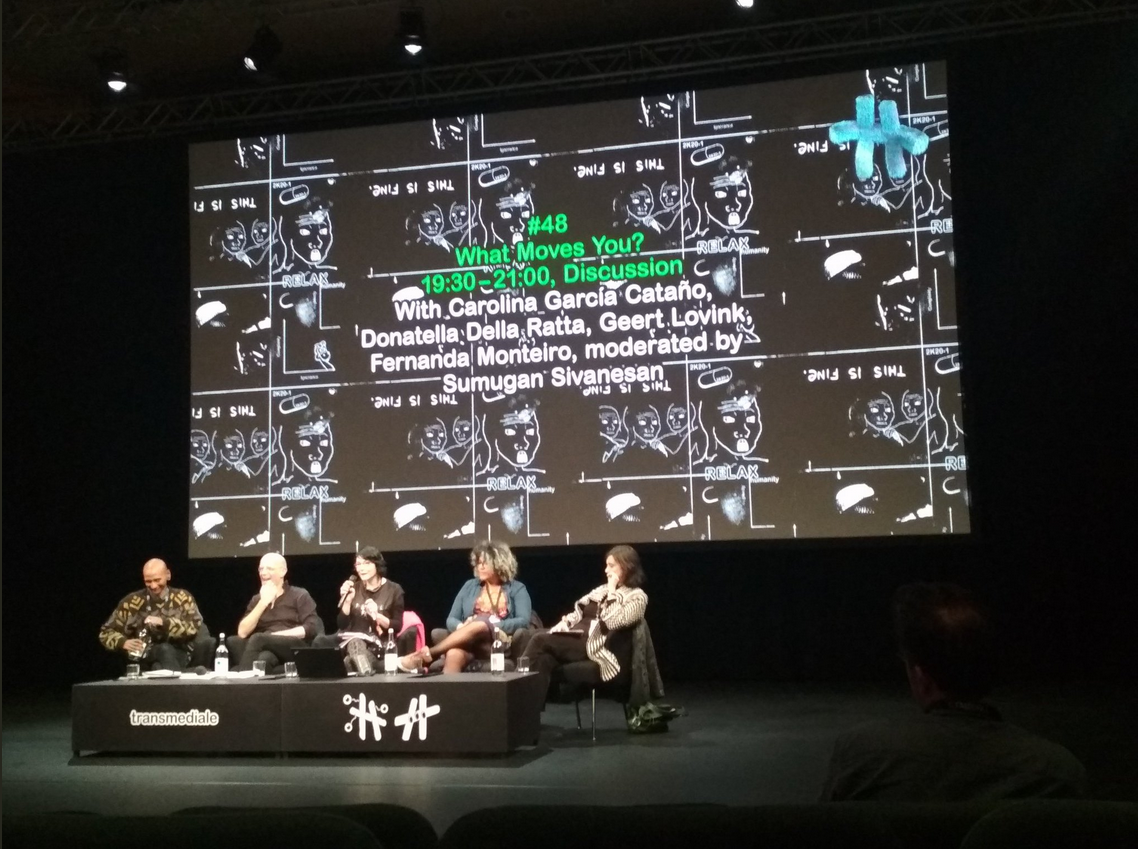 The following text has been drafted on the basis of the notes made for the participation in the closing event of Transmediale 2019.

During Transmediale weâ€™ve been dealing with the uneasiness as well as affections, our current lives are full of ambiguities, contradictions, feelings of discomfort and we are not sure how to deal with them.

Weâ€™ve also talked about alliances, who are they, where do we find them, do we have to look for them, understanding for alliances not only between individuals or groups but in a broader sense to concepts, situations, world-models, etc.

In this sense Transmediale as part of the digital culture framework has not built a strong alliance with free software movement, an ethical, political and social responsible approach to technology. When personal computers were still a rare thing to have, the foundations of the free software community were being laid, from the technical side it was being inherited decentralization, cooperation, creation and sharing of knowledge but specially free software reversed the idea of copyright as knowledge/cultural individual ownership. Through a license gives four rights to users (run, copy, modify, distribute software) and guarantees that free software will remain always free, it was a law hack that has set the basis of a new social model.

Almost since the beginnings there were two approaches to the idea of free software, that developed into different directions, free software and open source. Nowadays open source, stays away from the technopolitical framework of free software, and takes advantage of hacker spirit, distorting the values around it and making them profitable to neoliberalism, with it weâ€™ve accepted surveillance by default, violation of privacy, technology consumerism instead of technology lead-by the people.

Free software brings the opportunity to have technological sovereignty, means empowerment, defining how the future society should look like, but also brought a new model regarding creativity, collaboration, cooperation and scalability. Technological sovereignty relies on communities, that we can see and feel, that are not abstract entities but tangible groups whose developments should return to the commons.

The concept of the commons, now spreading inside free culture community, is going back and recognizing former imaginaries managed by indigenous/original communities, while adapting them to current times, including digital culture issues. We cannot create a Commons for some, but for all, and maybe our definitions (in westerns countries) have to be questioned and adapted to include other perspectives and visions. The commons promotes collective work and peer to peer communication, creates a new imaginary with images like the collective brain and is using networks as political concepts.

Internet, is being claimed as part of the commons, since gives the possibility to access to communication and knowledge, therefore society as a whole should benefit from it. It sets up a change of paradigm, where communication does not need intermediaries, everyone can access to technology, can have a voice and bring awareness, and this has shaped the new social movements.

In 1994, the EZLN, was the first intergalactic movement organized through Internet, encouraged local and global activism, shared concerns, used net art and hacktivism as a political tool. In Seattle the anti-global movement boosted Indymedia and with it the beginnings of citizen journalism. Since 2011, starting in Tunisia, followed by Tahrir square in Egypt, 15M Spain, Occupy Wall Street in USA, Y en a Marre in Senegal or Gezi Park in Turkey, technology, social networks, livestreams have played an important role, to build global networks and communication tools without intermediaries. But movements donâ€™t happen because of technological tools but because of social injustice, unsustainable living conditions, abuse of power, corruption, colonialism and people becoming aware and reacting to it.

The lack of social responsibility when using technology drives to abuse of power, corruption, and preservation of colonialism. We can see the increase on surveillance through everyday used devices, the development of border control technology, use of big data for profile creation, biometric id cards that facilitates the tracking of citizens when crossing borders, the use of drones for surveillance or the fortification and militarization of country borders. This way there is an increase of profits in the European defense industry.

This technified society is sustaining itself thanks to the exploitation by western countries who are looting natural resources specially coming from the African continent, where there is gas, oil, coltan, uranium, gold, copper, etc. [picture of African resources]. Western comfort and its technological â€œadvancesâ€ are based on continuous violation of human rights and destruction of the environment.

Western technification is suffocating a continent, denying its right to development and promoting the slavery of millions of people in their countries of origin or under the name of refugees or migrants in Europe. This politics of death or necropolitics is an accepted policy and is allowing the genocide happening at the doors of European borders as well as sustaining colonial policies in the countries of origin, as is in the case of France issuing the CFA currency in 14 African countries or having to pay back colonial infrastructures still 60 years later.

Meanwhile we cannot skip the contradictions that technology is bringing, while means looting and exploitation is also means flattening access to culture, knowledge and communication. Itâ€™s a mean of resistance and activism, helps overcome different kinds of borders, through availability of maps or translators or by enabling communication with family and friends. Provides resources for learning, entertainment, culture and science.

The tension that colonialism brings cannot be ignored any longer by western societies. As civil societies we have to take the responsibility to end colonialism, starting by questioning our living standards and real needs, our own views and perspectives, consumerism and rescue the value of human rights, beyond being a good headline, including diversity not as an attachment but as part of the core definition of things.

In 2011 worldwide protests created a lose framework, based on soft-identities and soft-leaderships, inclusiveness, non-violence, respect, decentralized structures, and where caring for the other and affections take a major role. This framework is enabling, to build alternatives, where there is no need to find one solution that fits everybody (old idea of ideologies) denying differences and diversity but facilitates the search of a way of doing together, how do we build this alternatives where each one has a voice, how to be together. In an increasingly fragmented society, there is also an increasing need to gather, to come together, overcome fear, bodify our lives, to bring affections, care to the front line, as a resistance to isolation in an individualistic society, showing the concern on how our mother earth is suffering the impact of destruction policies. Happiness and joy is a way to resist capitalism, affections brings us together, makes us strong and united, makes possible to go forward and define new alternatives and ways of fight.

In a world where fascism is taking over, even when we just may want to call it â€œextreme rightâ€, new ways of resistance are taking place and alternatives are been built based on life experiences, we just have to look for them, they are many and in all fields.

We are seeing how Yellow Vest, a paradigmatic uneasy movement, is disrupting the core infrastructures of France, despite the aim of getting them divided in left and right, the precarious living situation brings them together. We are seeing also how Extinct Rebellion is mobilizing against climate change or SudanUprising is challenging the country split because of colonial interests to come unite and fight against dictatorship, making the president stepping down but still fighting for civil power instead of a coup. These are recent streets movements but there are many other experiences that are working on a long-term run.
They will be mentioned shortly just to be aware of the change that is already taking place:

Stop-evictions in Spain is a model of a grass-root fight based on life experience and solving specific peopleâ€™s problems in a collective way, thousands of evictions have been stopped, but it’s especially a space that avoids the feeling of shame and failure, makes a private problem a shared political issue.

Y en a Marre is a senegalese social movement with a long-term plan to have an impact in society through different kinds of projects taking place in neighborhoods, schools, etc. and by promoting the concept of NTS, new type of senegalese, a conscient and aware citizen working to improve society.

In Tijuana, mothers organized resisting to feminicides, are exposing their lives to denounce the impunity around the deaths of young women in the maquilas.

Ni una menos, has become an international movement, denouncing all sorts of violence against women, pointing out all the micromachisms taking place in society and building up the idea of the Womens Strike, a care strike.

Las Kellys, an association that acts as a union, fighting for the labor rights of precarious workers in the cleaning sector, suffering of bad labor conditions and exploitation.

Women in exile, a self-organized women refugee group in Germany fighting against the conditions of women and children in refugee camps and empowering refugee women by facilitating them to fight for their rights.

15MpaRato in Spain, a citizen initiatives that sued former president of IMF, who has been imprisoned due abuse of power and corruption.

RIPESS EU â€“ a Network of networks and initiatives for the promotion of Solidarity Economy in Europe.
Global Ecovillage Network, is a global association of people and communities dedicated to living “sustainable plus” lives by restoring the land and adding more to the environment than is taken.

These are only some, of the many alternatives being built, we have to look around, so I would just ask the floor, what moves you?